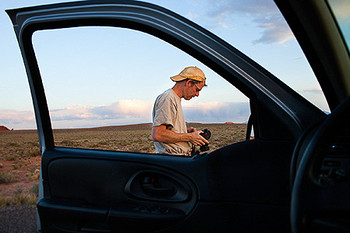 All proceeds from the fine art sales of Ken's photography goes to a college fund for Ken's children.

Born in Glen Ridge, New Jersey, on February 23, 1963, Ken spent his early years playing in the woods where the seeds for his love of the outdoors were ﬁrmly planted. At age nine his family moved to Augusta, Georgia where he spent his formative years and earned an Eagle Scout Award at age 14. He later earned a Bachelor of Science degree in Professional Photography from the Rochester Institute of Technology.

After college, Ken returned home to work as a carpenter for half a year to earn enough money to move to Atlanta and begin his career in advertising photography. The skills he learned during that time were useful throughout his career when sets needed to be built. He was also famous among his peers for being able to build a jig for just about any repetitive woodworking or creative task. Ken renovated much of his 1940 Decatur home and built his own studio from the ground up.

Ken began his advertising photography career in Atlanta by assisting established photographers and later became a studio manager. In 1992, he launched his own business. In later years Ken concentrated primarily on his love for landscapes, environmental portraits and people. Shooting these subjects came naturally to him, as if it was part of the fiber of his being.

As a trusted partner for his clients, Ken was allowed to execute his craft to create notable and often award winning advertising. Ken's work has been recognized by The One Show, ShowSouth (Best of Show in 2006), the PDN Photo Annual, Print Regional Design, Archive and won both gold and silver national ADDY awards. See a small sample of his advertising work here.

In 2008, Ken was diagnosed with a rare form of cancer for which he had no known risk factors. He endured difficult treatment and worked hard to live until the end. He is survived by his wife and two children. Ken's love for them and theirs for him lives on as does his legacy through these beautiful images.